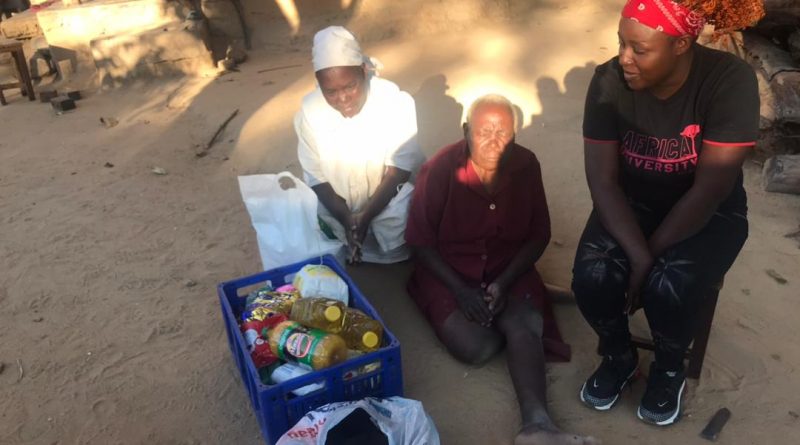 Nyasha Ndemera, a third year Agribusiness student in the College of Health, Agriculture and Natural Sciences noticed three elderly  women who were physically handicapped and working at Matanuska Farm in Mutare where she is currently on attachment. Humbled by their strength and determination to continue working daily in spite of their physical impediments, Nyasha stepped in to help.

Mrs. Makaza, Mrs. Maombedze and Mrs. Mupotsa have worked at Matanuska Farm their entire lives having been born there. Their disabilities developed in old age with their ability to walk being compromised over the years. Nyasha Ndemera spoke of how the three women have motivated her at a personal level to push through adversity. She said,

“They have shown me that being disabled is not a limit and does not prevent one from engaging actively in life. As their respective conditions deteriorated, they approached the farm management and expressed their desire to continue  in their work for the farm. Currently, they are working light jobs such as packing of farm produce and plastics.”

With farm work being the women’s only source of income, Nyasha  used her own funds and reached out to the community to raise money for groceries for the women and their families.

” One of the ladies  is the sole caretaker of her grandchildren after  her daughter abandoned her children so I felt moved to do something to help these brave women who are facing so much but bare it quietly. Undoubtedly it is a heavy burden to bare and I decided to help in anyway I could.”

The outpouring of love and  generosity of the community saw groceries including mealie meal, cooking oil, sugar, rice, flour , fruit juice, washing powder, soya protein and other basic goods procured for the three women and their families. Clothing for the winter season was also donated.

Nyasha said of the donations,

” It is important to assist those in need so that they feel that care and warmth of the community. Everybody must feel like they belong. My greatest concern for these women was that they are elderly , a portion of the society that is often forgotten. I can only imagine the burden they have born alone for so long, so these things that we as a community have come together to give to them is our small way of saying we remember and we honor you.” Nyasha said her motivation to give has been spurred by Africa University and its culture of community awareness, engagement and upliftment. Students at Africa University are emboldened to be agents of change and to believe in their ability to make a difference.