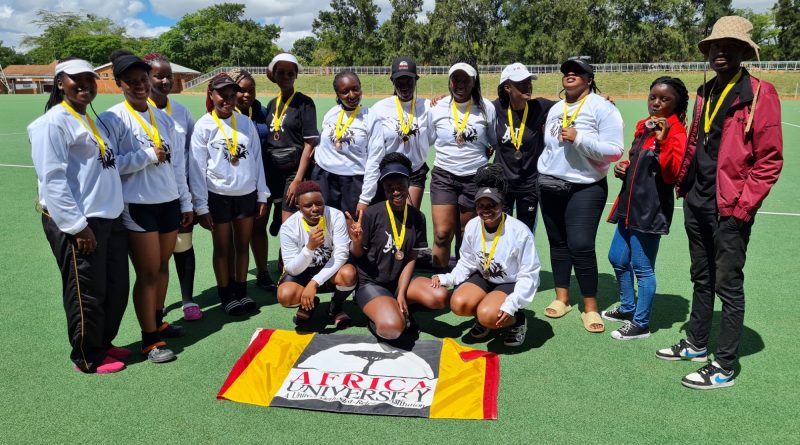 Rugby, Hockey and Tennis shone at this year’s recently ended Zimbabwe University Sports Association (ZUSA) Cluster 1 Games that were hosted by the National University of Science and Technology (NUST) from the 9th to the 12th of March 2022 in Bulawayo. 10 Universities participated.

The Africa University team was comprised of students who  participated in Athletics, Rugby, Table tennis, Cricket, Lawn tennis and Hockey. Although  weary of falling out of form due to a long sports hiatus brought on by COVID-19, they did however feel confident with Brendon Sibanda, the Rugby Team captain, saying,

“We have played very good games in the run-up to the ZUSA’s. The AU Panthers have never been stronger and motivated. I believe we can do this!”

The Hockey ladies team came out with the bronze medal after the team was pitched against stiff competition from the University of Zimbabwe and NUST who won gold and silver respectively.

Vimbai Shure, Tapiwa Nyemba and Ruvarashe Masawi clinched bronze medals in the women’s singles Tennis category while the AU Panthers Rugby team took bronze after an epic battle against the University of Zimbabwe . The Dean of Students, Mr. Miti was present with the teams throughout the competition and attended all games. Impressed with the talent and potential that was showcased , Dean Miti said,

“We did well and this is only the beginning, with the talent that we have, there is no limit to what these student athletes can achieve. We will do our best to support them and provide what they  need for them to get to the next level!”

AU Sports Director, Ms. Binamu was also pleased with the teams’ performances. She was grateful for the support rendered by the university.

“75 students made it to Bulawayo and  performed well far exceeding expectations. They can only get better. Great heart and pride was shown in representing AU. Gratitude goes to the University for its outstanding support.”