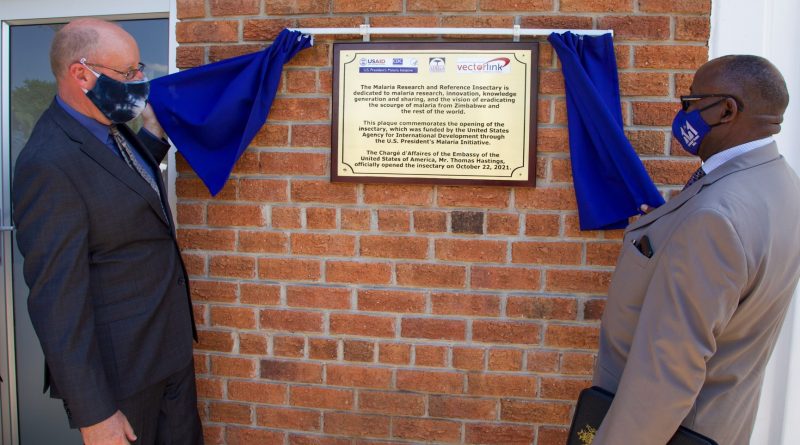 Africa University together with development partners PMI VectorLink and USAID launched the Malaria Research and  Reference Insectary Unit that will serve as a reference hub of mosquitoes collected from various sentinel sites across Zimbabwe to bolster research into ending the deadly scourge in Zimbabwe and Africa. Officially opened by the Charge d’Affairs of the Embassy of the United States in Zimbabwe Mr. Thomas Hastings, the state of the art facility is equipped with top top of the range technology that will greatly enhance the capacity of the university and its team of scientists to provide critical data needed for the development of national Malaria programme strategies and mitigation efforts.

Speaking at the opening of the event and welcoming guests to the milestone event that  included medical professionals from the private and public sectors, Acting Vice Chancellor Rev. Professor Peter Mageto provided some background to the partnership that brought the insectary to fruition as well as the intentions that drove the institution to pursue this path so passionately.

” This Insectary Unit is the result of several years of productive partnership among the partners whose singular mission has been, and is, to conquer Malaria and eradicate it from our continent. Since the inception of our partnership in 2017, Africa University has been committed to mosquito surveillance information for Malaria control operations in complementing and enhancing the research being done at the  National Institute of Health Research. The research and reference insectary that we are commissioning today will not only enable us to scale up critical surveillance information, but it will also be a powerful asset to the country and province serving as an educational hub for home grown innovation and solutions to flourish in line with our Parent Ministry’s thrust towards heritage-based education, towards the attainment of Education 5.0. For us to achieve this, we have deliberately developed partnerships with like-minded institutions like USAID, the President’s Malaria Initiative, ABT, VectorLink and ZAPIM as we broaden our scope and strengthen our endeavors through information sharing, innovative research, skills development and resource mobilization. We look forward to expanded partnerships as we tackle this challenge.”

With a capacity to breed and analyze thousands of mosquitos at a time, the Research and Reference Insectary Unit is a response to a surge in Malaria cases in Zimbabwe that are expected to increase with the onset of the rainy season  in the country . Manicaland carries a disproportionately heavy burden of Malaria with 51 % of cases and 31% of deaths reported from the province of total Malaria cases in 2013 .

Chief Director in the  Ministry of  Higher and Tertiary Education, Innovation, Science and Technology Development  and Guest Speaker Mr. Gonese who represented the Ministry, applauded the efforts of the university and its partners in taking heed of the call for universities to become knowledge hubs for the community and spaces where heritage based learning and resource ownership take place thereby emancipating youth to become problem solvers, innovators and game changers in the research and development spheres.

Keynote speaker Charge d’Affairs of the Embassy of the United States in Zimbabwe Mr. Thomas Hastings in his remarks said of the Malaria eradication goal that Africa University and its partners are working towards,

“Its is achievable and having achieved it in the United States, we are partnering with organizations like Africa University to do the same. The Presidential Malaria Initiative has contributed 163  million US dollars to treat and prevent Malaria in Zimbabwe where we have seen an over 50% reduction in cases and this is indicative of success that we should all be proud of but, we are not yet  finished.  This is why we are here today. The Acting Vice Chancellor referred to this effort of the  eradication of Malaria as being a war that requires evolving strategies . The purpose of this insectary is to to just that. To help Zimbabwe know and identify its enemy and this will help in research on mosquito behaviors, host preference,  effectiveness of insecticides and resistance. All this work brings us closer to elimination. I am very excited to be here at this private university that is a part of this effort. “

The Africa University / PMI VectorLink Malaria Research and Reference Insectary is the first in the country that is housed at an institution of higher learning demonstrating the willingness of the institution and its partners to train and build capacity among young researchers. With space to create a museum of mosquito specimens collected from the country, the room for learning is unlimited.