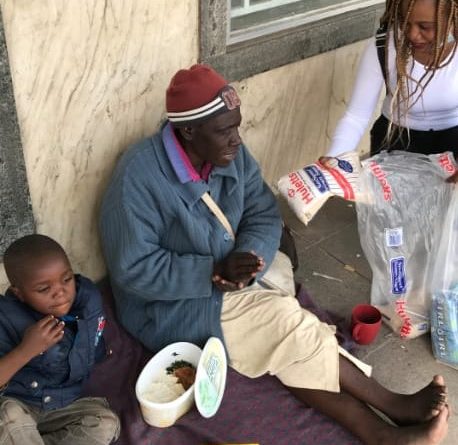 Alumna Naomi Nkoy  who hails from the Democratic Republic of Congo joined Africa University in 2015 enrolled in the Bachelor Of Health Services Management  Programme in the College of Health, Agriculture and Natural Resources from which she graduated in October 2020. Emboldened to chase her dreams and rise to the challenge to become a positive agent for change and leadership in the community, Naomi wasted no time in starting an NGO, Touch of Change, whose  primary focus is securing the welfare of  homeless people who are visually impaired or blind and their children.

An estimated 1% of Africans are blind with Cataracts, Glaucoma and  Trachoma being the main causes. A common tragedy in the history of blindness on the continent has been  that the bulk conditions that lead to  blindness are preventable and curable. The lack of access to timely medical interventions to prevent permanent eye damage is beyond the reach of many leading to irreversible blindness. Coupled with the stigma that surrounds physical handicaps and the lack of access to economic opportunities, people living with disabilities or PWD’s, are often vulnerable and a silent , overlooked group in many communities and societies across the continent.

Adding another  layer of complexity , the children of the blind and destitute  often become the “eyes” of the blind parent, assisting in the solicitation of money from well- wishers, as mobility  guides in the navigation of cities that do not cater to PWD’s and as a pillar of support in daily routines , often at the expense of their own education and progression. Naomi and her NGO Touch of Change seek to change this by bridging the gap and creating avenues and resources for the blind destitute and their families to access the help that they need to thrive and to also allow room for the development of their children through education, enhanced community support and interactions with youth from similar backgrounds and experiences to alleviate feelings of isolation and enhance their social skills .

Speaking of her passion for this cause , Naomi said,

” This desire to help others is driven by the generosity that was shown to me at Africa University. Like so many other African students, I had the passion to advance my studies but was short on funds. Africa University took me in and exposed to me possibilities I had never imagined before. They saw what I could become and invested in me and my dreams through the provision of a full scholarship. I imagine what my life would have been had I not been blessed in this way it is this that gives me the impetus to do what I do.  To give hope and shine the way as AU did for me.”

During the Pandemic, Naomi and volunteers of the NGO have made every effort , while observing COVID – 19 safety protocols,  to visit some of the blind-destitute and their children on the streets where they regularly beg for alms, sometimes  with food, sometimes with money but most times with an encouraging word and light conversation.

“Many times, just speaking with someone can mean so much for their mental and spiritual wellbeing most especially during these hard times. The people we have spoken to and interacted with say that they sometimes  feel invisible to the people and world around them. For them, just someone taking the time to inquire after their welfare and ask about their story means so much.” Naomi started Touch of Change in 2020shortly after graduating and though the NGO is still in its formative stages, she has no doubt it has a bright future.

“Sometimes we are afraid to pursue the things which make us happy because we are scared of failure, or that nobody will believe in our vision. I say just start! Regardless of how small you begin, you must make sure you start something all the same. Greatness will come after.”

Touch of Change  is based in Mutare , Zimbabwe and operates in and around the Manicaland Province.