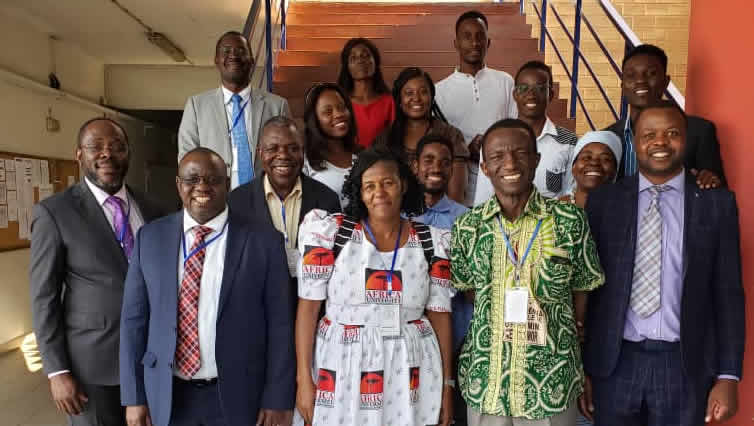 Africa University increased its continental footprint through active engagements of 13 representatives of the Africa University Angola Alumni Chapter at the Methodist University of Angola on 17 September 2019. The lunch-hour meeting which took place amid a series of reconnection emotions and amazement, revealed the positive impact Africa University alumni is making in Angola’s growing economy.

The AU delegation’s engagements with the members of the alumni in Angola showed that Africa University had produced a cohesive unit of highly influential pan African professionals of more than 200 alumni members who were leading the economic transformation of the country in the financial industry, education and training, oil and gas, civic society, agribusiness, infrastructure development, creative arts, religion, and many more.

In a clear demonstration of the quality of education at Africa University, and the versatility that comes with it, in some cases, enterprising AU Acacians discovered and successfully pursued opportunities in fields that are completely different from what they studied.

One such member of the alumni association, Dias Calenge, who holds a Bachelor’s degree in Theology at Africa University is now working for the Zimbabwean Embassy in Angola as a translator. The AU delegation was able to meet with Dias Calenge during a visit to the Zimbabwean Embassy in Angola on 18 September 2019, where further partnerships engagements with His Excellency Ambassador Thando Madzvamuse and his team, took place.

Africa University’s engagements with the alumni revealed an interesting story of Rev. Moises Bernardo Jungo, who was amongst the pioneering AU students and graduates in the 90s.
Having graduated with a degree in Theology, Rev. Moises Bernardo Jungo went on to choose Africa University as the destination for tertiary education of his four children, Helena Mitoque Jungo, Elizer Queta Jungo, Ganngao Queta Jungo and Elsa Queta Jungo who studied for bachelor’s degrees in Marketing, Business Management, Environmental Studies, and Public Administration respectively.

The four daughters successfully secured employment in international banks, oil and gas companies where their industry knowledge and competencies in English made them outstanding performers in the global job market.
The alumni engagement in Angola demonstrated the power of Africa and what we can collectively achieve. When we bring together a dynamic and diverse range of graduates through alumni networks, chapters, branches, associations, clubs and societies, anything is possible. Friendships are forged, wisdom is shared, and passions are strengthened.

Overall, Africa University has produced transformative leaders for governments, business, civil society and churches, with over 90% of its over 8000 graduates returning to their home countries to reinvest their skills and develop their nations.
This is an achievement that AU is immensely proud of, and it can be attributed to anchoring teaching and learning to the Pan-African context, and telling stories that build positive perceptions on Africa. The University believes that Africans are the best source of information regarding our continent, hence, we should effectively tell our success stories to the world.

Africa University is engaging in a new focused, exciting initiative that values strategic partnerships with its alumni and strives to create value through important networks, leadership mentoring and professional growth throughout the African continent and globally.

Be Part of the AU Alumni Network
When you graduate from Africa University, you become part of something bigger – a global network of more than 8 000 former AU students. Your success is our success. To be proud of our alumni is to be proud of what we do. But it’s more than that – our alumni have something extra – you have the African spirit: a passion and desire to change the continent for the better. Start on your journey to empower future leaders by providing us with your details by contacting the Director Advancement and Public Affairs on dapa@africau.edu, or call/whatsapp 263 772 409 651. Africa University. Leaders are born here!